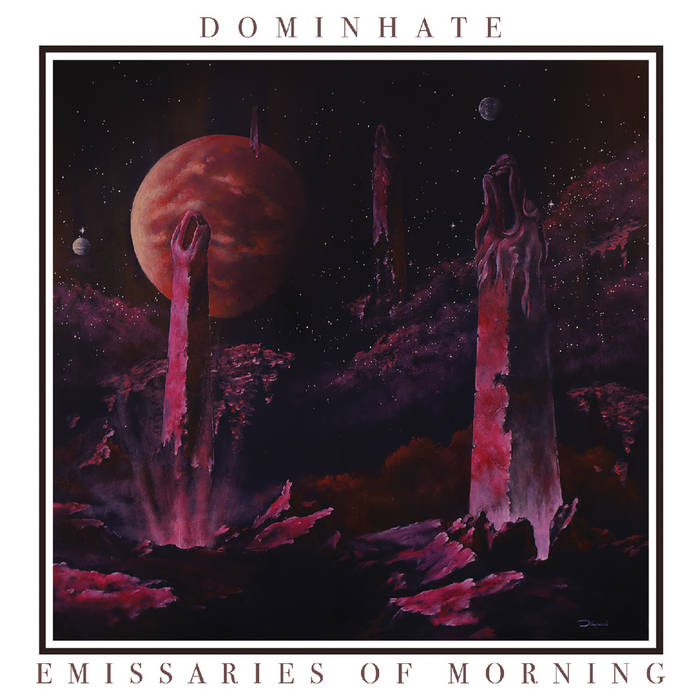 Dominhate retain everything essential about death metal while pushing towards added extremity - devastating rhythms with a dark flavour, unrelenting waves of earth-shattering percussion, formidable infernal roars from what sounds like only a mythical figure, and imagery that is hand-painted but ominous all the same with an undeniable otherworldly aura about it. Dominhate present the new face of death metal - contemporary without losing the ancient morbid touch, forward-thinking while paying tribute to the pillars of the genre. 'Emissaries of Morning' is a new chapter in death metal mastery; it is how you take forward the sound of the genre without betraying the roots.

A lost gem from last year definitely worth revisiting… If you like your death metal to be visionary and twisted and to masterfully follow in the footsteps of legends...then you have found your new favorite band.
Dominhate, bring all the 90’s best death metal glory to the table.
- Cvlt Nation

...the Italian death metaller’s sound simply stalks the senses and emotions every step of its invasive way.
- The RingMaster Review

It’s also a balanced blend of old school elements and riffs, a nod of homage in the direction of the likes of Morbid Angel and Incantation, but also with a very forward thinking approach to aspects of the composition.
- Devils Gate Media

This is thick and monstrous death metal that is unafraid of its roots and heritage, but allows the band a modern vibe that bolsters things into even heavier territory.
- Dead Rhetoric

For my money there just isn’t enough death metal like this and if I’m missing out on some key bands, please fuckin’ tell me. I can’t see any fans of old school and just generally fuckin’ good DM being displeased with this.
- Teeth of the Divine

Lately, bands like DEAD CONGREATION, SULPHUR AEON and CRUCIAMENTUM kept the dark Death Metal to the top level of perfection, but bands like DOMINHATE have undertaken such quest. Positive credits to Lavadome Productions that promoted another Italian band after the recent release of "Nihil Quam Vacuitas Ordinatum Est" by AD NAUSEAM, and it's more and more one of the most interesting labels in Europe for promising underground Death Metal acts...
- Voices From The Darkside


Dominhate have been doing just what they want to do: putting out sheer neck-breaking death metal.
- Metal Trenches