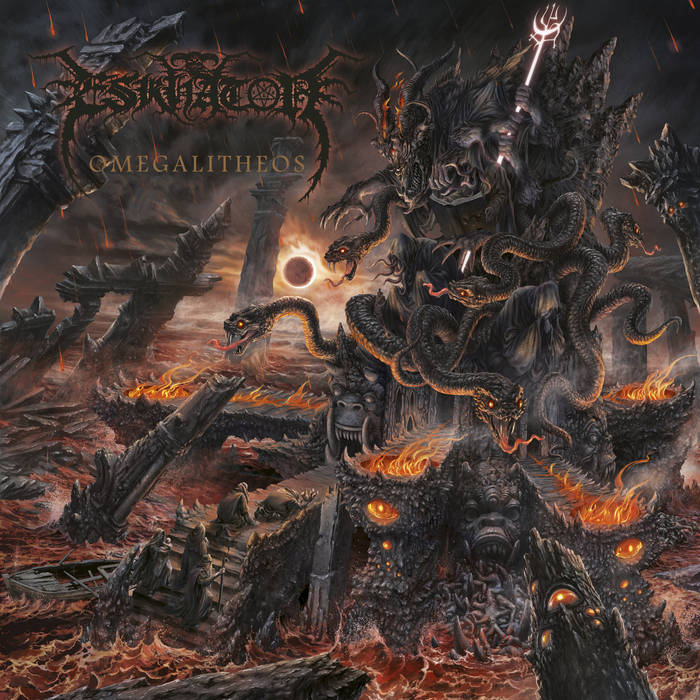 Chaos Storm If you're a fan of intense, fast, chaotic metal with a horrific atmosphere and you haven't checked this out (and the rest of the bands stuff), then you are doing yourself a disservice.

Omegalitheos is the third full-length manifestation from Australia's ESKHATON.

The Omegalitheos phenomenon exhibits fourteen songs of psychotic Death Metal violence and is to resonate with those, who are eager to receive from Death Metal more than the standardized, predictable formulas which the majority is in ease to identify and feels familiar with. Death Metal has always been meant to be sick, violent, dark source of energy twisting the senses and blasting the listener into possessed like states. This is what Omegalitheos does with no mercy.

You will recognize Omegalitheos among thousands of other albums. It stands here as some of the other landmark, or original if you will, releases of the past. Omegalitheos separates itself from the herd.
Expect painful brutality and instrumental carnage found nowhere else because where majority falls, the extraordinary ones rise to push and break the limits. Compromising at nothing.

CD and T-Shirts are available from Lavadome store at:
store.lavadome.org

Check also the ESKHATON bandcamp page for other exclusive merchandise offered directly by the band:
eskhaton666.bandcamp.com

The CD (black or silver disc version) comes with a 12 pages booklet having unique design on every page. No cheap cut and paste cover art effort. This is a release you just need to own physically.