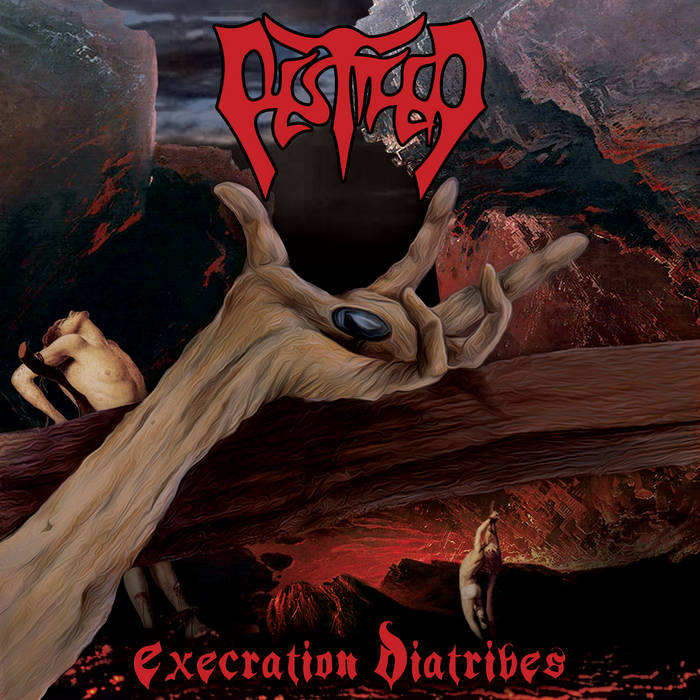 Matthew Toye Pestifer are a tour de force and this is an absolute firestorm. There's a big Krisiun vibe but this Portuguese trio isn't copying them. Support these fantastic newcomers. Favorite track: Dark Dimensions.

Once again, Lavadome productions are proud to announce another outburst of massive Death Metal hellfires through its cracks.
The Portuguese trio PESTIFER has arrived to wide-spread an apocalyptic rapture with its debut album entitled "Execration Diatribes".
The album will contain nine enraging compositions of finest Death Metal havoc and shall be released on February 14, 2017.

"Execration Diatribes" is a manifesto of what Death Metal is and should be in terms of thinking, spirituality and perceiving one's own limits and in accordance with the blasphemous, cruel and furious preception of the genre as such.

The legacy of albums like Hell Awaits, Morbid Visions, I.N.R.I., Black Force Domain has been channeled through "Execration Diatribes" in the purest form and at ultimate intensity.
Death Metal has been missing such an album for good 16 years. The wait is almost over. Wrathful legions of the apocalypse will rise again and destroy!

Their music is fast, dark, and nasty, but with an undeniable penchant for smart songwriting; every riff sunk its hooks into me, and they only got deeper as the album went on. Pestifer are nothing if not devoted to their roots, their debut feels like a long-lost classic.
- Toilet Ov Hell

...they bring devastation in the form of crushing riffs, demonic vocals and drumming that could drown out the sound of a full-on blitzkrieg. imply listen to the seven minute long opus ‘Riding The Storms Of Hate MMXVI’ if you need convincing. This truly is a stunning debut from a young band oozing confidence and a sure sign of great things to come.
- Metal Utopia 8/10

Congratulations to Pestifer for delivering the first great death metal album of 2017. The bar has been set!
- Brutalism 4/5

Pestifer have that knack for songwriting that sets them apart from many other acts who attempt to achieve this level of extremity … Execration Diatribes proves they have forged a sound all their own.
- No Clean Singing

…the tunes are merciless in their delivery, seething with the kind of pungent vitriol that makes classic death metal so appealing.
- Metal Rules 4.5/5

But what is particularly clever that the band has not forgotten to make actual music. An attentive listening session shows that there is still a lot of melody in both vocals and music. But because it's so extreme brutal you should be paying lots of attention to hear it.
…this album definitely adds something to your brutal collection. Sincerely recommended!
- Lords Of Metal 85/100

If you are a fan of well played, barbaric death metal with some thrash elements mixed in, then be sure to pick up Pestifer’s debut cd today.
- Canadian Assault


The Portuguese trio have created a record to stand the test of times, and malefaction is its pure essence.
- Rockbrary


For a debut opus these guys really produce the goods here, delivering an album full of old school class with touches of real originality and experimentation belaying a band of relative immaturity.
- Moshville